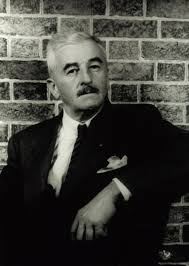 William Faulkner is among the most celebrated people in literature. Being an American by birth, the writer is renowned for the many plays, short stories, novels, poetry, essays and even screenplays. He received many awards in all these fields of literature and he holds many Nobel prizes. He spent the better part of his life on Lafayette County in Mississippi where he breathed his last.

William Faulkner was born on the 25th day of September the year 1897, the first born of the four sons of the late Cuthbert Faulkner and Maud Butler. When he was one year old, they relocated to Ripley Mississippi. Here, his father worked in the family owned Gulf & Railroad Company as a treasurer. His father had wanted to take over the company from his father, but this did not happen as the company was later sold. While his father was interested in outdoor activities like fishing and hunting, his mother took keen interest in education. She taught them to read and sent them to public schools. He started off well in the first grades but slowly his performance began to drop. This is because he began paying more attention to learning the history of the place and began ignoring his studies. He was not able to complete his high school education.

In his teens, he dated a girl Estelle Oldham but she later married another boy, Cornell Franklin. Their marriage lasted for 10 years, they divorced and William Faulkner married Estelle 2 months after her divorce. The two had one daughter Jill and they settled in Rowan Oak.

Even after he failed in his high school education, he continued to take keen interest in the town’s history. He often listened to stories from his elders on the civil wars, slavery and conquests. When he was seventeen years of age, he met Philip, who was older than him by 4 years and had a lot of interest in literature. It was then that Faulkner joined the University of Mississippi. He was not able to complete his studies there and he left after the first year. He later proceeded to join the Sigma Alpha Epsilon Fraternity to pursue his career in literature. His first article he wrote were short stories and poems which he submitted to Stone for publishing. However, all of them were rejected by the publishing houses.

William Faulkner’s first novel was in the year 1925, ‘Soldiers’ Play.’ He then met Sherwood Anderson, who greatly influenced him to write his first work of fiction. Sherwood Anderson assisted William Faulkner by submitting his articles for publishing. Two of his novels, ‘Soldiers’ Play’ and ‘Mosquitoes’ were the first of his works to get published.

William Faulkner fell off his horse on the 17th of June 1962 and developed thrombosis. He later succumbed to a heart attack on the 6th of July the same year and died with 62 years of age.

William Faulkner is a renowned writer that received many awards for his literature. His most popular stories he wrote was ’A Rose for Emily’’, a short story which was the first of his works to be published in a popular magazine. He died and was buried in St Peter’s Cemetery in Oxford.

Many thanks to James Karpac Orthodontics for sponsoring our blog!