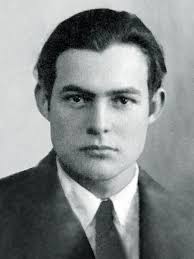 Ernest Miller Hemingway was an American author who won the Swedish Academy’s Nobel prize in literature back in 1954. He is one of the most influential and celebrated literary stylists to have lived in the twentieth century. Ernest Hemingway built himself a reputation for his exceptional writing that was set apart by the emotional content, style and spectacular greatness of vision he applied.

Hemingway was born on July 21, 1899 in Cicero (Oak Park), Illinois to a country physician father and a mother who loved music and was active in the church. His father taught him how to hunt and fish while his mother influenced him to sing in the church choir and play the cello. Most of his summers were spent with his family in the woods found in northern Michigan and would accompany his father on his professional calls.

Despite being popular in high school and his love for outdoor life, Hemingway sought to experience life outside his home twice. He first enlisted to serve in the infantry when the United States was involved in World War I (1914-18), but was rejected owing to his eyesight challenge. He instead enlisted as an ambulance driver with the Red Cross medical service. He became a hero when he aided a wounded man to the aid station despite being badly wounded on his knee. After more than 200 shell fragments were removed from his body and legs, he enlisted to be a foot soldier for the Italian army. He served until the truce was called on the Austrian front and his bravery saw him earn decorations from the Italian government. He soon after returned home where he was hailed as a hero.

After the war, Ernest Hemingway worked for the Toronto Star as a foreign correspondent (North East area). He had made a decision to concentrate on fiction writing and his great journalism talent and magazine publications of his stories made a good impression on celebrated author Sherwood Anderson. Anderson introduced him to Ezra Pound and Gertrude Stein, two Europe-based American writers. In 1923, Hemingway managed to publish his first ever book Three Stories and Ten Poems. The stories in the book depicted his budding genius. In 1925, he published In Our Time depicting the initiation of Nick Adams, a young man who later became a model for his other heroes, into the world of violence and pain.

In 1926, Hemingway returned to the US armed with the manuscripts of a number of short stories and two novels. He managed to publish The Sun Also Rises describing how the war affected a group of Englishmen and Americans. He also published A Farewell to Arms (1929), Death in the Afternoon (1932), The Green Hills of Africa (1935) and two fantastic short stories “The Snows of Kilimanjaro” and “The Short Happy Life of Francis Macomber”. He also published the novel For Whom the Bell Tolls, which is considered as his most ambitious.

After the huge success of the novel For Whom the Bell Tolls, Hemingway went on a literary silence for about a decade. This could be as a result of the World War II (1939-1945). He married a Time reporter known as Mary Welsh. He had been married on three occasions to Hadley Richardson (one son), Pauline Pfeiffer (two sons) and Martha Gelhorn, and all of these marriages ended in divorce. In 1952 he published The Old Man and the Sea, which was considered a masterpiece and won the Pulitzer Price (1953). Ernest Hemingway managed to get the Nobel Prize for Literature in 1954. Hemingway and his wife moved to their new home at Ketchum, Idaho. After staying there for a few months he was admitted at the Mayo Clinic for Hypertension treatment as well as depression. He was subjected to an electroshock therapy. Ernest Hemingway grew bitter with the illness that impaired his writing and humiliated him and he shot himself using a shotgun on July 2, 1961.

Special thanks to our sponsors for today: nashville landscaping!